It was pouring heavily on the skull of an afternoon street. Splashes of a freshly brewed rainwater charred the edges of the gate and the footpath where he awaits his daily ride. The office was already missing his feisty charm. Vailing through options of a possible safe route to the office, he found none. Pockets empty, mobile network fluctuating, time short and mind on a race, he was already behind his schedule of attending an important meeting. Amidst the heavy air in office, a phone rang

Sir, you need to excuse for a moment, I need to get him a cab, pointing at the phone.

“You can’t get up. You have a deployment scheduled in 30 minutes. You have to finish this right now. Now!”

It was not until I started sailing my own ship did I realize what’s without a friendship. And frankly, it’s nothing without this friendship. The values that grow with them are a priceless asset, one can never possibly buy. And neither one can repay such bonds. It’s amazing how life away from home feels exactly like home when living with friends whom one call as a family. There is no problem that’s dealt alone and no happiness shared without them.

The place was filled with chattering strangers, clattering noises of cutlery and leaning sounds of cool breeze whizzing by the 9 PM terrace ambiance. It wasn’t these noises that filled the ears of the people sitting at the corner, surrounding a table of beers glasses and unfinished starter plates. They were least bothered about the footsteps occasionally passing by them.

“I can see in your eyes, you are worried. What’s troubling you?”

Staring at the precipitation rolling down outside the glass, he was catacombing across his thoughts to reply to the question.

“You know you have been my motivation since day 1. I learned the art of patience from you. I didn’t expect that I would meet somebody like you whom I am proud to call a friend. Even though I had friends in my college but they weren’t the definition until I met you. You can say me what’s wrong buddy”

These words sunk in deep in the heart. So much so that it was an unbelievable trance of warming enlightenment. His newly found friend spoke up something he never thought anybody could say him. It was less appreciation and more realization to him. He looked up and emptied his heart.

“Bro, I want to do what I always have loved to do. I am not happy with how things are going on right now.”

No specifics were required beyond these lines.

“I understand and I know what you want. Hold on with me. We will do what we have planned for us.”

“How can I ever thank you for being such a good friend.”

“You already did by being my brother.”

It’s stories of love, heartbreak, politics, war, money, and power that rules the pages of news around the world. But stories of true brotherhood always reside on the pages of memories. One said love has no boundaries and neither does a friendship has any. People say breaking things are easy than constructing them. Now, go on to break the bond between some true pals and it’ll be impossible nonetheless.

The greatest possibilities to the highest honor are laid on roads one feared couldn’t be traversed ever. — Teddy

It was a sultry and tiring evening after a tedious day. The stars were hidden behind the black veil of clouds waiting to drench the world below. There was an eerie calmness on the air which evoked the feeling of a harsh storm on the horizon. The sense of a thunderous night was palpable. Within an hour, all hell broke loose. The streets were waterlogged, winds gushing through the cracks of the windows and sounds of a heavy rainstorm masked the music playing inside.

“I want to have some spicy chicken soaked in garlic gravy and a creamy base.”

“You spoke my heart out but where the heck will we get chicken now. All the shops are closed at this wee hour and we can’t ride out to the depot.”

The urge to eat chicken was so much so that even the unprecedented weather outside couldn’t deter their thoughts.

“Well, I know a place 2 kilometers from here where I am sure we will find a live chicken. But the only constraint is we have to walk and we don’t have any rain protection.”

They stared, paused for a moment and gave the slightest of the smile to each other. It was enough to decide the fate of the dilemma. They didn’t look back and not even gave a second thought to what if they don’t get the chicken.

Enough is never enough for friends who don’t see this world filled with a dearth of being together. Minimum words are enough to convey the maximum thoughts between a true friendship. One can make a friend because they find their thoughts similar and then there come true friends, who are together because it’s the freedom they find along each other’s vicinity.

I am glad I found few of these people in this life and I am proud to call them not as just friend but a benevolent brother, including her.

This is a story about a community living in Palawan, Philippines who are proud to live and grow in a land filled with natural wonder. One particular native of the place gave some insights on how they care for their environment and keep the land free of all evil.

2. Invite your friends and family to Global Culture Project Group page. You must tell them about our work and what we are planning to do. The more we spread the better prize to win in the next competition.

3. For written entry, you can do a poem, story or micro-tale. Word limit is 200 for all. Remember it has to unique and special. One entry per person.

4. For photo entry, you must send a minimum of 720 p image. The photo has to be clear and easy to understand. One entry per person.

5. Nobody is allowed to enter both words and photo. If you send a word entry then you are not eligible for the photo entry and vice versa.

6. All entry should me send to: globalcultureproject18@gmail.com Subject should be: “Entry to GCP”

7. The winner’s work will be selected to be published on the website. If you have a problem with this publication then refrain from participating.

8. Winner will be sent the gift card via email.

9. No copyright violation whatsoever. Words and photos both will be checked for plagiarism from multiple sources 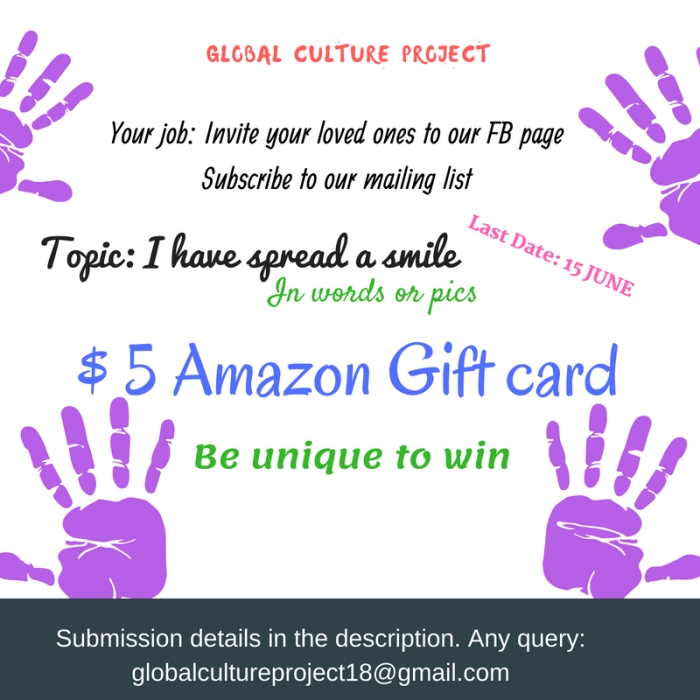 Email to get us in your group and help inspire them to spread the love. It can be seminar, workshop, conference and all those fun stuffs!!

Let’s care for our only Earth when we can!!  Taytay, Palawan, Philippines

A Project dedicated to tell the tales of #Palawan secrets and how these people have loved and kept their #environment a heaven on Mother Earth. 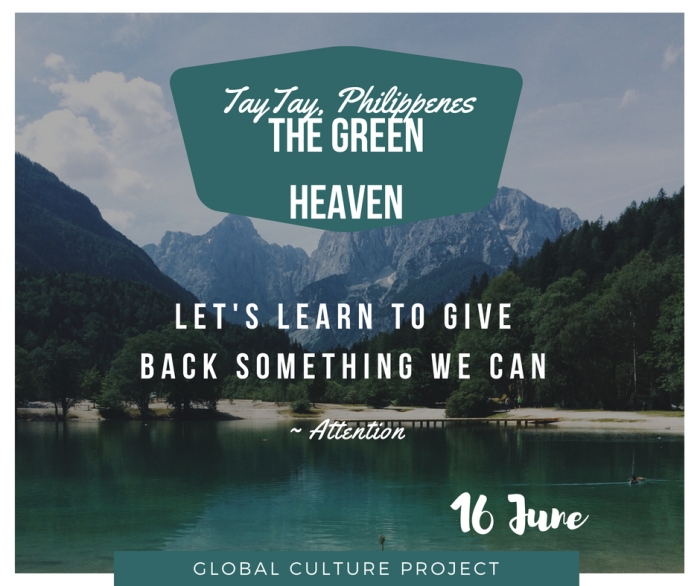 Taytay, Rizal in the Philippines is a group of #islands that has some of the picturesque natural beauty and well preserved, sustained environment. Global Culture Project had an exclusive interview with a native from Taytay who spoke all about the procedures to care for our environment and how the place is so special.
Read the interview to be published in June and #discover places that you only imagined exist in movies.
Please follow us on Facebook, Youtube and subscribe to the website’s mailing list. Also you are always welcome to share your experience on global culture by participating in the submission process which is open all year round.
globalcultureproject.com

Read about a fantastic poetry group in Pune, India 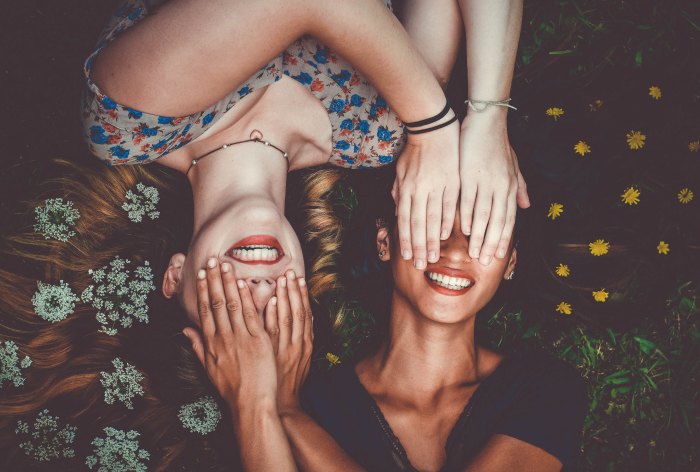 All favors that once spoke with the pen,
gone with the winds of the Northern sky

All the sweet pieces of tattered colors,
that once drew the hands with specks of trust
N those toys which once were kept in peace
are now the unsucceeded times laid to rust

Coz what is life if not life has a home,
and what is us if it not has two hearts as one,
See the infinity lurking beyond the clouds,
All unreplaceable spaces of a road,
that has no feet that walk alone,
and no beat that keeps quite

It’s a mirror of what’s up in there is here,
stars hang like diamonds in a velvet sky,
Like every good deed waits to shine,
Names have faces and face have mistakes,
Just like every star is flawed and
none ever stops to ignite
Watch the two worlds walking down together,
Broken, shattered yet in love altogether.

This is a chance for you all to submit your words for my website. Your work will be uploaded permanently for the global audience to witness your creativity and skill. Read below carefully before submitting

1. The theme is global culture and its impact on you. It can be anything from liking some other country’s dress, habit to meeting a special someone from another country or any personal/motivational/inspirational/ heartbreaking/joyful experience related to global culture. Anything outside will be removed. You will be notified in both the cases.

2. Write anything from poems/stories/snippets/conversation along with a suitable title. Keep in mind you writing for a global audience so make sure your work is error/abuse/hurtful sentiments free. ONLY 1 SUBMISSION PER PERSON ALLOWED. WORD LIMIT: 2000 at max.

3. You can submit photos. The photo has to be related to your words. Or any other photo that you feel can impact on the theme of the website. Photo should be jpeg/jpg only. I would prefer a 720p or 1080p size pic. If you can’t then, lower sizes can also be submitted provided it does not get pixelated when I upload. You will be notified of any updates. ONLY 1 SUBMISSION PER PERSON ALLOWED. Photo submission is not mandatory.

4. I will accept all submission to my email only: sourav.bis93@gmail.com
The Subject should be “Submission to GCP”. You must provide your name that I will put up on the website. In case you don’t want your real name to go up, you can choose your pen name as well. You must write your submission in plain texts only. No word/docx file is accepted. Photos should be attached as jpeg/jpg file. You can submit your pic (your face) as well if you want others to see who wrote it. This is all optional.

5. I will read each submission and reply you back before final acceptance. I will use royalty free pics from other websites to be attached with your submission, regardless whether you’ve submitted your photos(not your personal ones) or not. You will NOT BE PAID at this moment coz I’m yet to monetize my website. BUT I PROMISE after this rolls out smooth, each accepted contributors will be given a token of acceptance from my side.

In return, I will need your support to help this project reach more people. This cannot grow without your support and love. This is a journey will you all. There is NO LAST DATE for submission. I want your best work for the display.

Let’s start it together:
The Global Culture Movement Initiation Program. Please share your words and opinion and help this project grow.